In Watchtower’s “What Does The Bible Really Teach?” Jehovah’s Witnesses are taught that “the Bible indicates that Michael is another name for Jesus Christ, before and after his life on earth.”(Watchtower 2005: 218) They maintained:

While there is no statement in the Bible that categorically identifies Michael the archangel as Jesus, there is one scripture that links Jesus with the office of archangel. In his letter to the Thessalonians, the apostle Paul prophesied: “The Lord himself will descend from heaven with a commanding call, with an archangel’s voice and with God’s trumpet, and those who are dead in union with Christ will rise first.” (1 Thessalonians 4:16) In this scripture Jesus is described as having assumed his power as God’s Messianic King. Yet, he speaks with “an archangel’s voice.”(Awake! 2002: 17)

Does the Bible really indicate that Jesus is archangel Michael? Contra to Watchtower’s theology, I contended in this series of articles that 1 Thessalonians 4:16 does not indicate that Jesus is an archangel Michael but the Lord God himself (Psalm 47:5; Micah 1:3; Zech. 9:13; Isa. 27:13;). I explored the meaning of this text, how early Church(ca. 30- 325 A.D.) understood it to mean and Angelology.

Paul assured the Thessalonians not to be distressed over the dead, for the Lord himself will come down and the dead will indubitably not miss the parousia, the glorious coming of the Sovereign Lord, because He will descend “with a loud command”, “with the voice of archangel” and “with the trumpet call of God”. The dead in Christ will rise to join the Lord prior to the one living (verse 15). All in Christ will meet Him in the air to be with Him forever (verse 17). 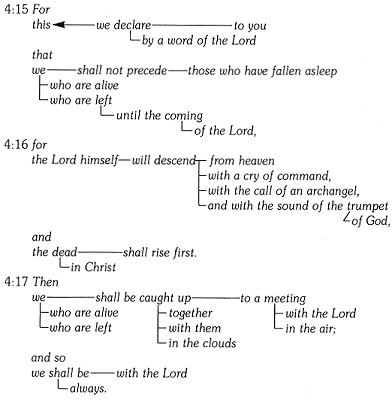 Jehovah’s Witnesses hub on the second phrase “with the voice of archangel” in this three virtually simultaneous phrases that herald the personal return of the Son of God, and concluded that Jesus is archangel Michael (Jude 9) since He speaks with “an archangel’s voice.”

I believe Watchtower eisgete (reading into the text, and not exegete) in reasoning that Jesus is an archangel because He descended, not speak, ἐν φωνή  ἀρχάγγελος (MSS Trl: en phōnē archangelou “with the voice of an archangel”). If we eisgete 1 Thessalonian 4:16, then I believe we are to grant that Jesus is also God since He descended ἐν σάλπιγγι θεόῦ(MSS Trl: en salpingi theou “with the sound of trumpet call of God”).

Exegesis: With the Loud Command, With the Voice of Archangel, And With the Trumpet Call of God.

With the Loud Command

The first phrase is “en keleusmati”. A cry or a command that must be obeyed. George Milligan expounded that “[i]t is not stated by whom the κέλευσμα in the present instance is uttered, perhaps by an archangel, more probably by the Lord Himself as the principal subject of the whole sentence.”(Milligan 1908: 60)

Neither the origin nor the nature of this particular command is clear. The command could be issued from Jesus to the dead to arise (cf. John 5:28–29), from Jesus to his entourage to proceed (cf. 2 Thess 1:7), or from the archangel as either a cry of announcement (like the trumpet, cf. Rev 1:10) or an order to the heavenly host.” (Martin 1995: 151)

Gene L. Green also resonated that the “text does not indicate who issues this loud command” but proposed God as a probable candidate of the one “who orders the dead in Christ to rise “(Green 2002: 224). Therefore we can only speculate who issued this loud command, which herald the personal descending of the Lord himself.

In the next article, I attempted to deal with phrase: “with the voice of archangel” as used in 1 Thessalonians 4:16, showing that Watchtower reasoning is not Biblical warranted and is at odd with early Christians understanding between ca. 30-325 A.D.

Question To Jehovah’s Witnesses: Jewish and early Christians taught that there are more than one archangel. What reason(s) could be offer to argue that there is only one archangel?

Next: With the Voice of Archangel