In “Risky business: The world is out of control, sociologist Ulrich Beck tells Stuart Jeffries” (Feb. 11, 2006), Jeffries, the Guardian’s feature writer and columnist, published his interview with Beck, a professor for sociology at the University of Munich whose lectures converges on sociology of risk, social inequalities, modernization theory and transformation of work. This 6 years old interview caught my attention and made me ponder if Beck is correct in thinking that atheism is one belief system among many.

On the controversial cartoons depicting Muhummad, Beck invoked the German philosopher Jürgen Habermas’s distinction between secular and post-secular societies. “The basic assumption of the secular society is that modernity overcomes religion. In this sense most continental European countries seem to exist as secular states, while Britain and America seem to be post-secular – they see atheism is only one of the belief systems and that religion still is an important voice of humanity.”

The dialogue that followed, which I re-edit to capture the interview, left me pondering if atheism could be considered a belief system.

Jeffries: Would you have published the cartoons?

Beck: “No. It’s important to fight for freedom of speech, but it has to be related to principle. You can’t play with these freedoms. You have to be very careful not to hurt religious feelings.”

Jeffries: Are you religious?

Beck: “Not at all. Max Weber [the German sociologist] said he was unmusical when it comes to religion. I’m like that, too. But it’s important to understand that not everybody is going to be an atheist.”

Jeffries: Was that assumption ever plausible?

Beck: “It was the assumption of most social theory. All theory of modernity in sociology suggests that the more modernity there is, the less religion. In my theory we can realise that this is wrong: atheism is only one belief system among many.”

Question: Is Beck correct in viewing atheism as one belief system among many? Give reasons

“The God Delusion makes me ashamed to be an atheist” said Michael Ruse, a philosopher of biology at Florida State University.

As Ruse once pointed out, “Richard Dawkins in The God Delusion would fail any introductory philosophy or religion course. Proudly he criticizes that whereof he knows nothing.”(Ruse 2010: int) I believe Dawkins, a brilliant Zoologist, failed again in his recent guest-voice post at The Washington Post: Dawkins: Don’t need God to be good … or generous.

Contending for a conclusion: “atheists and freethinkers are full human beings whose generous impulses are at least as sincere as those of the religious”, Dawkins expounded:

One reason for our[freethinkers, atheists, agnostics, secular humanists – whatever name non-believers go under] unpopularity is the widespread belief that you need God in order to be good. Going along with that misconception is further belief that atheists are less generous than religious people, less philanthropic, less likely to donate to charity. Even if that were the case it would, of course, have no bearing on the truth of religious beliefs.(Dawkins 2012: post)

When theist and atheist philosophers argues that with the death of God, comes the death of objective moral values and duties, they mean that God’s existence, not belief in God, is the ontological ground for objective morality. Since if God does not exist, good and evil is illusory. Theists, atheists and freethinkers are good not because of their belief or lack of belief in God, but because of the existence of God.

It seems that Dawkins himself believes in this widespread belief that you need God in order to be good, since he wrote if there is no designer then “at bottom,[there is] no design, no purpose, no evil, no good, nothing but pitiless indifference.”(Dawkins 1995: 85). He explained:

“This is one of the hardest lessons for humans to learn. We cannot admit that things might be neither good nor evil, neither cruel nor kind, but simply callous—indifferent to all suffering, lacking all purpose.”(Dawkins 1995: 112)

In The God Delusion, Dawkins explained “[i]t is pretty hard to defend absolutist morals on grounds other than religious ones.”(Dawkins 2006: 232) It seems Ruse was accurate in asserting that “People forget that it is possible to be intensely religious in the entire absence of theological belief.” (Ruse 2003: 335). I am beginning to believe that Dawkins is intensely religious. Well, I could be very wrong.

Ruse, Michael (2003)Darwin and Design: Does Evolution Have a Purpose? Harvard University Press.

“Philosophers refurbish the tools of reason to sharpen arguments for theism God? Wasn’t he chased out of heaven by Marx, banished to the unconscious by Freud and announced by Nietzsche to be deceased? Did not Darwin drive him out of the empirical world? Well, not entirely. In a quiet revolution in thought and argument that hardly anyone could have foreseen only two decades ago, God is making a comeback. Most intriguingly, this is happening not among theologians or ordinary believers—most of whom never accepted for a moment that he was in any serious trouble—but in the crisp, intellectual circles of academic philosophers, where the consensus had long banished the Almighty from fruitful discourse.”

A wonderful article on the come back of Arguments for Existence of God answering  “Is God Dead?” Times’ cover story of  April 8, 1966.

Is God dead? It is a question that tantalizes both believers, who perhaps secretly fear that he is, and atheists, who possibly suspect that the answer is no.

God is making a come back and I am proud to be alive witnessing  a great number of Christians recapturing our lost ground of Reason/Philosophy, in loving God with all our mind.

No fear, No tantalizing question, God is alive and well in the intelligentsia. As “Modernizing the Case for God” article concludes:

But if in an age of science, faith in God can be more rationally grounded, as a growing number of philosophers now attest, then the reasoning soul who is so inclined can more surely and assuredly feel comfortable in moving beyond reason. 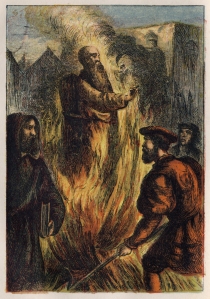 Christian: Do you know that, the first Christians died for their belief that Christ Jesus rose again?

Skeptic: Well, Terrorists die everyday for their belief, dying for your belief does not make it true!

Christian: You got that right! But have you noticed that Terrorists die because they believe what they are told to be true, thus if they knew it was false, the would not sacrifice their lives. Liars make poor martyrs.

Skeptic: Yes, what is your point?

Christian: My point is, the first Christian, including Jesus’ own followers were ready to be burnt, tortured and killed(to which many were), not for what they were told to be true as Terrorists, but what they saw and knew to be true.

Pow! There Goes A Skeptic Down 🙂

The power of loving our enemies: Story of  a former Ku Klux Klan leader

Reverend Elder Johnny Lee Clary learned to hate at a very young age. He was raised in a family filled with racism, anger, and bigotry. As a young teenager, after his father committed suicide and his mother abandoned him, Johnny found himself alone and looking for someplace to belong. At 14 he was seduced by the teachings of the notorious David Duke and the Ku Klux Klan, and he joined the organization. As an impressionable young man, Johnny became so enthralled with the sense of belonging and a need for “family” that he participated in KKK events as a security enforcer and bodyguard to David Duke.   END_OF_DOCUMENT_TOKEN_TO_BE_REPLACED

“We are skeptical of claims for the ability of random mutation and natural selection to account for the complexity of life. Careful examination of the evidence for Darwinian theory should be encouraged.”

A growing list of signatures signed by world wide scientists with Ph.D. in a scientific field such as biology, chemistry, mathematics, engineering, computer science, or other natural sciences; or  holding  M.D. and serve as professor of medicine refusing Darwinian theory.

Dissent From Darwin: What is it about:

During recent decades, new scientific evidence from many scientific disciplines such as cosmology, physics, biology, “artificial intelligence” research, and others have caused scientists to begin questioning Darwinism’s central tenet of natural selection and studying the evidence supporting it in greater detail.

Yet public TV programs, educational policy statements, and science textbooks have asserted that Darwin’s theory of evolution fully explains the complexity of living things. The public has been assured that all known evidence supports Darwinism and that virtually every scientist in the world believes the theory to be true.

The scientists on this list dispute the first claim and stand as living testimony in contradiction to the second. Since Discovery Institute launched this list in 2001, hundreds of scientists have courageously stepped forward to sign their names. END_OF_DOCUMENT_TOKEN_TO_BE_REPLACED